MACE “Store of the Year” crowned at annual awards ceremony 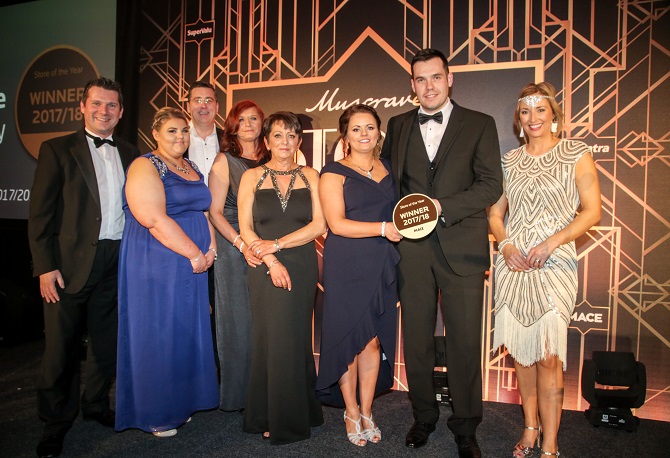 McCaughan’s MACE in Armoy clinched the coveted title of ‘Store of the Year’ at Musgrave’s annual awards event held at the Culloden Estate & Spa on 23rd March.

All the winners were greeted on stage by Managing Director of Musgrave, Michael McCormack and Sales Director for SuperValu and Centra, Nigel Maxwell.

Musgrave organises the awards ceremony each year to showcase and recognise its 240 independent retailers in Northern Ireland across the SuperValu, Centra and MACE brands and finalists are selected using a rigorous selection process involving several rounds of performance and standards audits.

Speaking at the event, Musgrave Managing Director, Michael McCormack, said: “Huge congratulations to all of our winners at this year’s Store of the Year Awards. It was a tough competition with many wonderful contenders and the judging process this year was as rigorous as ever.

“The Musgrave Store of the Year Awards are a part of a continuous drive to maintain the highest possible retail standards across the company; and it is a great opportunity to recognise, reward and celebrate all of our retailers that are the true pioneers of our profession, going above and beyond on a daily

“I would like take this opportunity to not only congratulate the winners but to thank each and every one of our retailers who work tirelessly to maintain the high standards that Musgrave as company strive to uphold.”