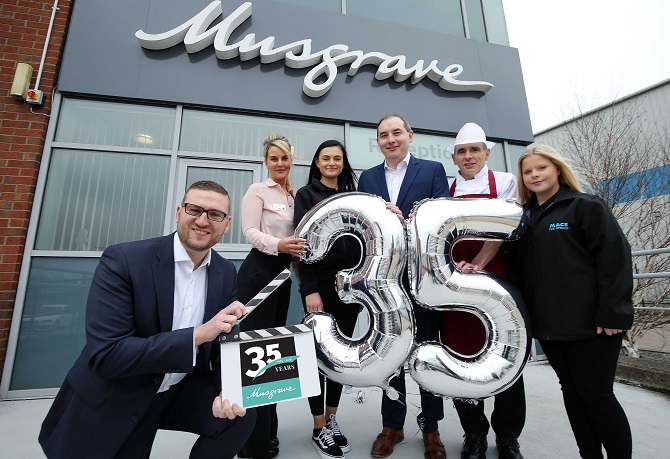 As part of the creative behind the ad, the grocery and convenience retailer carried out a search last month to find people from Northern Ireland to appear in a “top-secret project”. Though project details were not released at the time, over 50 people attended an open casting in Belfast to be in with a chance of landing a role.

It can now be revealed that the project was in fact a brand new 40 second TV advert, celebrating 35 years of Musgrave loving local in Northern Ireland.

The Musgrave business was founded in Cork by brothers Thomas and Stuart Musgrave in 1876. Both brothers later went on to marry the “Robert’s sisters” who came from Enniskillen, Co. Fermanagh. And in 1982, the business expanded into Northern Ireland with the opening of the Duncrue “Cash & Carry” – known today as Musgrave MarketPlace.

The TV ad, directed by top NI talent, Colin McIvor, follows the journey of food from farm to fork, and charts how Musgrave has been ‘loving everything local for 35 years’ and making a positive impact in communities right across Northern Ireland.

Desi Derby, Marketing Director, Musgrave, said: “We are celebrating loving everything local for 35 years and this includes our incredibly talented food and drink producers, our independent retailers, the dedicated people who work in our stores, our warehouse and office colleagues and of course our loyal customers who drive our ambition to always be the best. Supporting local is of paramount importance to Musgrave, that’s why we’ll spend £120 million on Northern Irish food and drink this year, continuing to work with over 140 local suppliers – selling more than 3,000 local products in-store.”

But it was the people of Northern Ireland who became the real stars, following an open casting call looking for homegrown talent, continued Desi.

“All five members of the Carter family from Bangor came along to the open casting and they were so talented that we gave all of them a starring role, including Dad, Steve (44), and his children Cameron (15), Ethan (13), Aaron (10) and Leah (8).

Andrea Trainor (39) and her son Finn (5) from Newtownabbey and sisters, Niamh (16) and Ciara Rogan (10) from north Belfast also impressed us and feature in our advert.

“Eagle-eyed viewers will also see the Titanic Hotel, who are a customer of Musgrave MarketPlace, and the stunning, Silent Valley, make appearances in our ad. We hope everyone enjoys it and we are looking forward with optimism and confidence to loving everything local for the next 35 years and beyond”, Desi concluded.

The new Musgrave television advert, which will run for a number of weeks, will premiere on UTV on Saturday April 14, during Britain’s Got Talent and at the same time on SuperValu, Centra and Mace’s social media channels.